Don’t like to travel with a bunch of people? Or maybe you are running late to your office. Want to avoid extra traffic on your way home back? Okay, the only solution to all these problems is to book yourself a Rapido.

Yes, you don’t have to worry about any other riding problems anymore. Rapido is the one-stop solution for you. All you need to do is just download the app from the store and ride safely anytime and anywhere.

And today we are going to talk or discuss Rapido, its revenue model, and a few other most asked questions. So let’s get into it.

2. How did Rapido Start?

The basic idea of the three co-founders was to hire people who owned two-wheelers. Two of them had already invested in a vehicle themselves and felt that sharing their ride with passengers interested in going in the same direction was a great way to utilize the extra capacity of their rides. 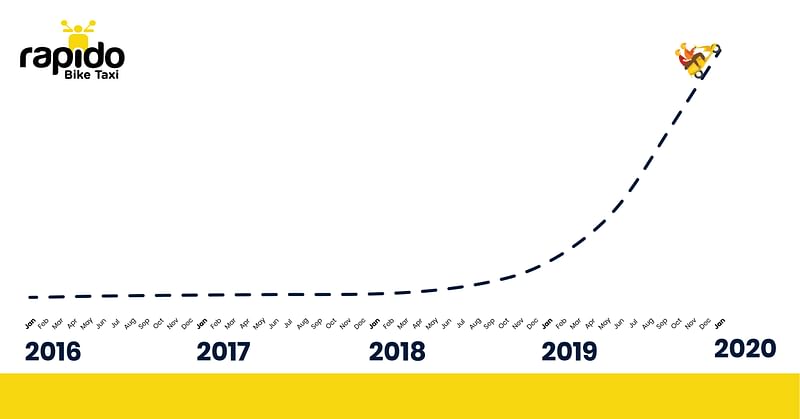 While they wanted to develop an application to help them recruit drivers, they didn’t just want to copy Uber and Ola in this regard. They wanted to build on these platforms and make something new – like an app based on the Rapido concept! This app would have allowed riders or drivers of any kind (cars, cycles, scooters etc.) interested in sharing trips with other people going in the same direction to connect instantly.

The co-founders believed pairing up riders and drivers through “real-time carpooling” would not only completely reinvent getting around town for millions of Indians but also create a new business model for transportation as well!

That’s why Rapido started out very simply by initially developing a product that catered to the needs of their customers. Since their inception, Rapido has continued to cultivate their products with the help of a dedicated team of 15-20 individuals who have grown leaps and bounds with the company since day one, ultimately able to grow along with Rapido for the betterment of all its employees.

3. How Much does Rapido Captain Earn?

The average Rapido Captain salary would be somewhere around 22,000 which is above the national average by a few percent.

However, it may vary based on time, day, location and distance. If it ends on the city outskirts the rate may increase too.

4. How Much Does Rapido Pay Per Kilometer?

As per a few reviews and discussions it was found that Rapido pays around 10 INR per KM for a rapido captain. This can reduce to 7-8 INR if they are working without Incentives.

Sometimes, they also get incentives for completing a particular number of rides in a day.

5. How much does Rapido Captain earn per a day?

The average that a Rapido captain can earn per day is around Rs. 1200 by simply picking up and dropping people from one location to another.

6. Is rapido bike ride cheaper than a taxi?

Bikes have more advantages than cares when compared and cost is one of the advantages. Bike taxis are found to be 40% cheaper than cab rides. Isn’t it a good thing? It’s definitely yes. You get to travel around for almost 40-50% cheaper price with the same process and ease of ride booking.

The base price that the Rapido charges from the user is ₹ 35 for 2kms. It may reduce to ₹ 15 after the initial 2 kilometers.  Similarly, Uber and Ola have the same base fare which is Rs. 7-8 per kilometer.

But unlike Rapido these prices keep changing based on peak timing and non peak timings. They also have surge pricing during high demand hours and then the price may go upto Rs. 25 per km.

Rapido is constantly innovating to create the best user experience possible for their customers. Recently, Rapido offered free rides to those who were taking public transportation, to help alleviate some of the traffic in Delhi during their implementation of the odd-even rule.

With Rapido one does not have to worry about finding a place for their vehicle because it can be dropped off at any of Rapido’s conveniently placed stations that are located in parking lots or garages – already equipped with parking attendants and always close by when you need them!